Today, I'd like to welcome N.R. Walker, author of Taxes and TARDIS,  to my blog! Not only is she a fabulous writer, she's also a dear friend, and I consider it an honor that she graciously agreed to join me for a post on the day of her new release. Without further ado, I'll turn it over to her:

******
I’d like to thank the lovely Layne Faire for inviting me to do a guest spot on her fantastic blog!

I’m here to discuss my new release Point of No Return, which comes out August 18th.

So let me start with how the idea of this story came to life.

I’d had the idea of a boxing story in my head for while.  I love the idea of having strong, tough, kick-ass gay guys and that’s where this story started.  I had the original plot idea, but as I started writing, the characters took the story in a different direction.  Instead of being a boxing based story, Point of No Return ended up more of a cop/detective story.

Before I’d started writing, I knew my main character Matthew Elliott was a cop, and I knew he was blond and handsome, but I was somewhat stuck on his love interest. So I started trawling the web for internet pictures, and I found him.  Needless to say, he wasn’t exactly difficult to have in my head. ;-)

Then I needed a name.  The character was half Japanese-half Spanish and I needed a name to reflect to this. The surname, Franco, being Spanish, was a great fit because the boys at the gym would know him as Frankie. But he also needed a first name that could be either male or female, so if the name slipped out, Matt’s co-workers wouldn’t realize Matt was actually dating a man. The name Kira worked for this very reason, and through some research I found Kira Takeo was Japanese for Dark Warrior.  It was perfect.

And so Kira Takeo Franco (aka Frankie) was born.  I fell in love with these two boys. I know that’s cliché, all writer’s love their characters. But I adored Kira. Yes, Matt is the main character, but it’s Kira who carries the story.   He is a complete paradox; he’s strong and resilient, yet completely adaptable. He can be brutal, lethal even, yet he’s gentle and soothing. He anchors Matt, yet completely sets him free.

The action is fast, and there is violence; Matt’s an LA narcotics detective, so it’s safe to assume it’s not a fairytale style story.  (Disclaimer: Fairytale, no. HEA, hell yes. I can’t read, let alone write, stories without the fluffy, tooth-cavity inducing sweetness of a HEA.)  LOL
Here’s a mashed-up version of the blurb, and an excerpt.  Enjoy… 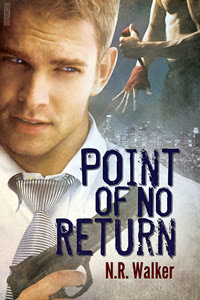 Meet Matthew Elliot. Blond-haired, blue-eyed and rugged good looks, he’s one of LA’s best detectives, and portrayed by the media as the ‘Golden Boy’ of the Fab Four; a group of narcotics detectives who’ve shut down drug-rings all over the city.

Matt works hard, and after losing his mom before he was just eighteen, he has dedicated his life to his job. His partner Mitch, is the closest thing to family he has, and along with Kurt and Tony, the other members of the Fab Four, there isn’t much hidden between them.

Except for the biggest secret Matt has.

The secret he’s hidden from everyone.

He’s not the playboy as they’d all believe. It’s not the women he wants at all.

Enter the half Spanish, half Japanese boxing coach at the gym, Kira.

He was in there warming up with a skipping rope.  His cocoa-colored torso flexed fluidly and his feet barely hit the floor.  He was agile for someone of his size.  He wasn’t huge, but he was tall with great muscle definition.
He smiled when I walked in and hung up the skipping rope on one of the hooks on the back wall.  I tried not to think about his smile or his body, and needing a distraction, I started to strap my hands.
Like he seemed to understand the effect he had on me, he was all business, though he still smiled. He was still fucking beautiful, but he wasted no time on putting me on the bag, only this time he didn’t hold it, so he wasn’t facing me.  Which was much better.
I found it easier to concentrate when I wasn’t looking directly into his eyes.
He stood at my side and corrected my footing.  Apparently my left foot turned in, when I stood in position, making my right swing overcompensate.
By the time my half hour was up with him, he had improved my focus.  I’d hardly had time to think about him.  He was good at what he did, of that there was no doubt.
When I was done, he threw my towel at me.  “That’s better, Detective,” he said, with a one-dimpled smile.
He had a sheen of sweat over his shoulders, and his tank top barely covered him, his pecs, his shoulders...
“Yeah, it was.” I pretended to wipe my face with my towel to cover the fact I’d just checked him out.
“More focused today,” he said.
I let out a nervous laugh.  “Something like that.”
When I looked up at him, he was staring at me.  “Oh, I almost got a real smile,” he said with a smirk.
I could feel myself blush. Fucking hell. I couldn’t help smile a little. “Almost.”
“I think you should call me Kira,” he said, matter-of-factly.
“Why?”
“Because it’s my first name,” he said with a shrug.  “And everyone here calls me Frankie.”
He must have seen the confusion on my face, because he clarified. “See, if you tell your friends at work you’re having dinner with Frankie, they’ll know it’s me.  But if you tell them you’re having dinner with Kira, they won’t have a clue.”

Both men feel the immediate connection between them, and they soon start seeing each other outside of the gym. They also agree that to reveal their relationship, and sexual orientation, would be detrimental to their jobs. But as they fall in love, Matt finds this secret harder to keep, especially from his partner, Mitch.

He couldn’t have imagined being outted as a gay man would be the least of his problems.

Point of No Return is released on August 18th 2012 with Silver Publishing.

You can buy it here:   BuyPoint of No Return

******
Oh wow! this sounds fantastic! I can't wait to get my copy later on today! Make sure you check out N.R. Walker's blog for more details about her upcoming releases, works in progress, and an outstanding free read.

Unless otherwise stated, we do not claim ownership of any of the pictures posted on this blog. If you see one of your pictures here and want it removed, please contact us and we will do so ASAP.